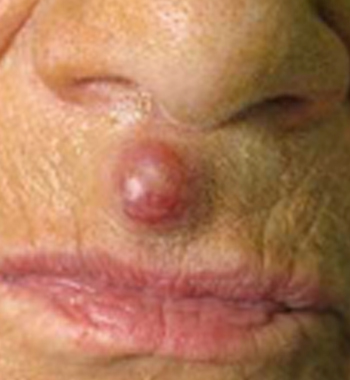 Merkel cell carcinoma (MCC) is a rare and aggressive skin cancer. It can grow quickly and spread or return after treatment. Because MCC is aggressive, doctors recommend prompt treatment. The sooner it is treated, the better the outcome. To improve a patient’s outcome, a team of doctors including dermatologist, medical and surgical oncologists (cancer specialists) and radiation oncologist (specialist trained in treating cancer with radiation) will create a specialized treatment plan.

Merkel cell carcinoma (MCC) most commonly looks like a shiny, pink, dome-shaped growth. It often looks harmless, mistaken for a pimple, bug bite or cyst.  MCC often appears on skin that has had lots of sun exposure. About half of MCCs develop on the head and neck, with many occurring on the eyelids. However, MCC can develop anywhere on the skin including arms, legs, feet, buttocks and genitals.

Features of MCC include:

In 2008, scientists discovered a virus called the Merkel cell polyomavirus. This virus is found in many Merkel cell tumors. Scientists continue to study this virus to get a better understanding of this cancer.

Most MCC are diagnosed in people who are:

However, there are other risk factors for developing MCC:

Diagnosis begins with an exam. Your dermatologist will closely examine your skin looking for suspicious spots. When one is identified, a biopsy will be performed. The only way to diagnose Merkel cell carcinoma (MCC) is with a skin biopsy. Your dermatologist can perform this procedure during an office visit.

If the biopsy report indicates MCC, doctors with experience treating this rare skin cancer should be consulted. Each of these doctors has expertise in a different field of medicine such as dermatology, surgery, oncology (cancer specialist) and radiation oncology. Together, these doctors will create a treatment plan.

Once the diagnosis has been made, it is critical to find the stage of the cancer. The stage tells the doctors how deep the MCC has grown and whether it has spread.  The stage will determine what treatment is most appropriate.  To find the stage, a patient undergoes a process called staging. Staging often begins with imaging tests such as PET, CT or MRI scans. This allows the doctors to see if the cancer has spread to other organs or body parts.

After imaging tests, many patients with MCC will have a surgical procedure called sentinel lymph node biopsy (SLNB). This can tell doctors if the cancer has spread to a patient’s lymph nodes. SLNB is usually an outpatient procedure, but may require a short hospital stay.

The procedure is as follows:

The stage of the cancer is determined by where it appears. The stages are as follows:

The stage plays a major role in the treatment plan. Based on stage, patient age and health and patient preferences, a treatment plan will be formulated. Once surgery has been performed to remove the tumor and lymph nodes, radiation and chemotherapy may be considered. Radiation is often part of the treatment plan because this cancer has a high risk of returning after surgery. Studies show that radiation reduces the risk of MCC recurrence. Patients usually begin radiation within 4 weeks of having surgery to remove the cancer. Radiation treatments are also given to patients who cannot undergo surgery. Radiation is usually given 5 times a week for 5 weeks.  Chemotherapy is used for patients who have MCC that has spread beyond skin and lymph nodes. Chemotherapy treats the cancer using drugs that kill cancer cells.

We are here to answer all of your questions and make personalized recommendations. Contact us today!