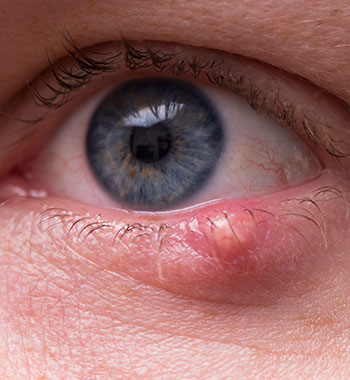 While most SC begins on the eyelid, this cancer may begin elsewhere in any sebaceous (oil) gland. We have sebaceous glands on most areas of the skin but the greatest number is in and around the eyes/eyelids. Other growths can develop on or around the eyelids and most are benign or innocent. If you notice a growth on your eyelid that remains despite treatment, you should make an appointment to see a dermatologist. The sooner this cancer is diagnosed and treated, the better the outcome. If SC spreads, it can be deadly.

Many sebaceous carcinomas (SC) develop on an eyelid, upper or lower.

The following are common things that may be noticed:

To see the cancer, sometimes you have to pull gently on the eyelid to see the tumor. As the cancer progresses, it may look like pink eye.  The growths that develop may open and ooze fluid or bleed. Eyelashes may fall out. As the cancer grows, it can affect the eyesight.

SC is rare. Other growths that develop on the eyelid are much more common.

SC can be mistaken for some of these eye conditions:

While SC is most common on the eyelid, it can occur elsewhere on the body. When SC develops elsewhere, it usually appears on the head or neck. SC has also been diagnosed on the genitals, ear canal, breasts and trunk of the body. In these areas, SC may look like a slowly growing pink or yellowish lump that may bleed.

If you see any of the following for more than 2 weeks, you should immediately make an appointment to see a dermatologist:

A growth or spot that starts to bleed, grow, or change in any way.

SC is rare, so scientists still have much to learn, including what causes it. Because most SCs develop on the head and neck, the sun may play a role in causing this skin cancer.

The most common risk factors for sebaceous carcinoma are as follows:

Diagnosis begins with a history and exam.  If your dermatologist suspects SC, be sure to tell your dermatologist if you have Muir-Torre syndrome (or if a family member has it), a transplanted organ, received radiation to the head or neck or taken a diuretic medication.

If you are diagnosed with SC, your doctors will want to know if the cancer has spread to the lymph nodes or other parts of the body. You will need:

Other treatments may include:

We are here to answer all of your questions and make personalized recommendations. Contact us today!